Nobody realized how our world, which we are used to, can change from day to day. Coronavirus closed millions of people at home, the restaurants, bars, hotels cease their activities. The air transport stopped, the export and import goods are much harder, the costs of transport are more expensive and the borders are closed.
None of the economic sectors remained intact. Everything, except for one thing, hasn’t changed and won’t change. People have to eat and the farmers have to produce food.
The agri-food processing sector wants to operate at full swing, but this is impossible in many factories – workers deficiency due to illness, time off work, childcare or loss of the sales market (HoReCa sector is stopped) and necessity of limit production. The same has happened in the global dairy market.

It all began in China, which is the biggest customer of European skimmed milk powder (SMP). Asian giant removes thousands of tones a year from the market. The butter, cheese and SMP indexes on the Global Dairy Trade are keeping falling, with spreading coronavirus furthest parts of the world.
Drop in consumption caused by a reduction in the activity of the HoReCa sector, nonexistent social life, rarer visits in grocery stores results in a steady growth of raw milk excess, which is a process to produce SMP or butter. These two factors; increasing of stocks and falling prices for them at the same time, results in a reduction of milk price for the farmers. The consumption of traditional and regional cheeses decreased, so the small milk processing industry suffered. In other countries, dairies decided to limit milk collection, discontinue it completely or reduce the price of the raw milk to an unprofitable level. This forced many farmers, for example from France, Great Britain, the USA or Canada, to pour off millions of liters of produced into the sanitation system or on the field. European organizations and associations from the milk sector called for help.

Anti-crisis measures on the milk market 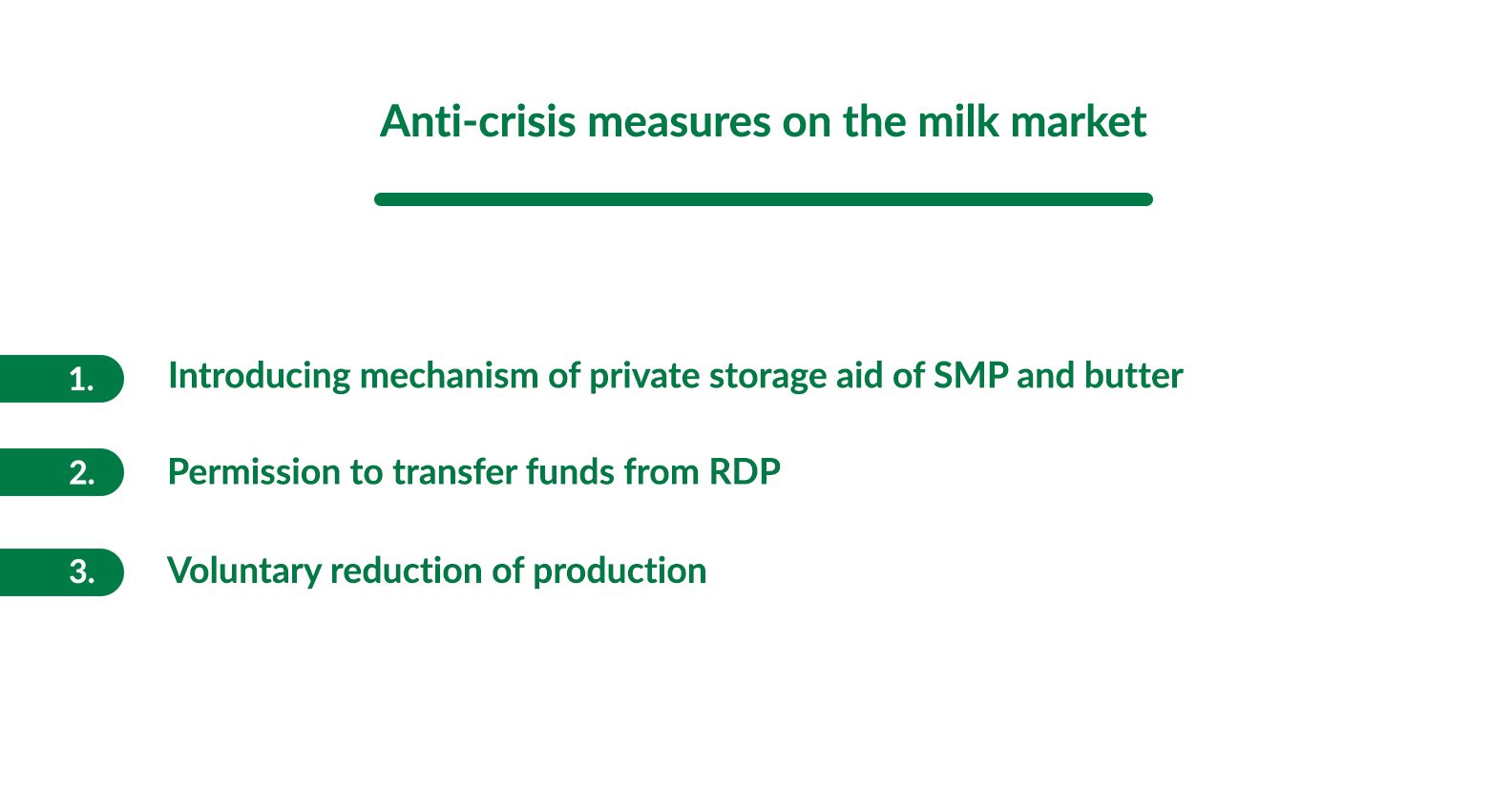 The drama playing it on the European Commission’s eyes forced Brussels to launch the support mechanism on the milk market. On 22 April 2020, it was decided about introduce crisis prevention measures consisting of private storage aid of SMP, cheese and butter and permission to transfer funds from RDP to anti-crisis measures in the agri-food sector was granted.
Unfortunately, the amount in many countries is insufficient to support all agricultural sectors. The measure is aimed at stabilizing the market situation, but unfortunately it will only help the dairy industry, not the farmers. A better solution would be to launch intervention buying-in skimmed milk powder, but the European Commission informs that it doesn’t have funds for this and doesn’t provide help like this.

Estimates for the milk market

According to the European Commission’s long-term projections, low milk prices could persist even until Q3 2020. It is difficult to forecast at the moment, as coronavirus epidemics are dying out at a different rate in each country and the economy will be unfrozen gradually. There is talk of recurrence of the disease in the future, so the market and we must learn to function in this way and find a solution that is both safe for human health and an equally effective tool for market stabilization. In many European countries, milk production is now starting to grow and will peak in the summer.
At the same time, the European cow population is forecast to decrease, against a background of falling milk prices and possible drought and roughage deficiency. Many cattle farmers’ associations are calling for a compulsory reduction in milk production, which is likely to reduce milk production anyway due to the factors mentioned above.

The lack of profitability of production won’t encourage the growth of herds, but rather the remove of cows. Milk producers will be forced to optimize their costs and leave the best in their herd. Systems that monitor cow behavior, milk production, health, nutrition and welfare 24 hours a day, 7 days a week helps to select such animals. It is now recommended that farmers should give up the calf’s milk replacer and substitute it with cow’s milk, prolong the drying period, save on concentrate feed expenses and reduce milk production by limiting the ration of concentrate feed by 4%. This won’t impact on animal health and welfare but will save money. 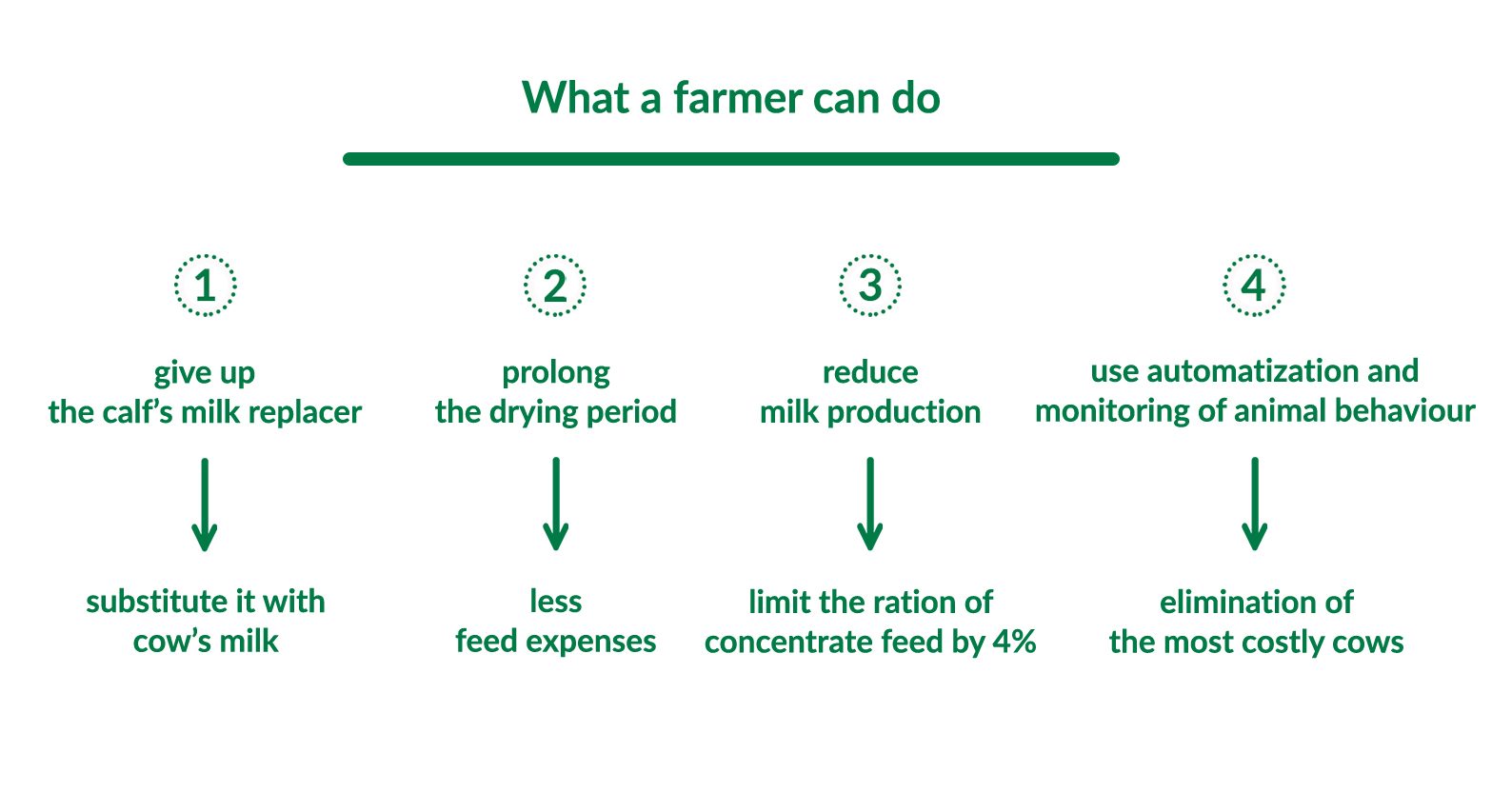 Remember that investment in automatization, monitoring of animal behavior, effective and fast detection of heat or upcoming diseases are also methods to reduce farm costs.